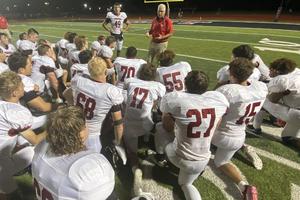 After spending 31 seasons on the Lorena sidelines Ray Biles is hanging up his whistle. The

Lorena ISD Athletic Director and Head Football Coach has announced his retirement. “It’s a good time for me and my family,” Biles said. “I wanted to leave the pantry full. We have a lot of good coaches and players in place. The program is stable.”


Biles came to Lorena in 1992 from Katy High School where he was an assistant coach from 1980-1991. It was his first, and turned out to be the only head coaching job Biles would have. Over the years there were opportunities for Biles to leave but he chose to stay in Lorena. “We raised a family here and this is a great community,” Biles said. “I am grateful for my time in Lorena and I always felt supported by our administration and school board.”

In his three decade career at Lorena, Biles amassed a record of 207-141. He led the Leopards to nine district titles. Lorena made the playoffs 17 seasons under Biles' direction and won the 2021 Class 3A Division 1 State Championship. It was the program’s first state championship since 1987.